Mozambique is one of the poorest countries in sub-Saharan Africa, despite experiencing a sustained economic growth in the past years. It’s also one of the twenty least-electrified countries in the world, with 20 million people still lacking electricity access rate in 2018, with an overall electrification rate of 31%, and a mere 8% rate in rural areas.

The Belgian Development Agency (ENABEL) in partnership with the Mozambican Fundo de Energia (FUNAE), as part of a wider program (Renewable Energy for Rural Development – RERD), in 2020 issued a tender to carry out a feasibility study for 5 hybrid mini-grids to be developed in the Zambézia and Nampula provinces, which was awarded to EnGreen, in joint venture with the Reiner Lemoine Institut.

The five feasibility studies cover all the aspects needed for the implementation of the mini-grids, including the load forecast, the sizing and design of the generation and storage section, the distribution network and last-mile connections. According to the results of the feasibility studies, the five mini-grids will feature a total of 1.4 MW of solar photovoltaic, and 11 MWh of Li-ion batteries, connecting more than 5000 rural customers.

In the next months, the EPC tender will be issued and the mini-grids are expected to be completed by the end of 2021 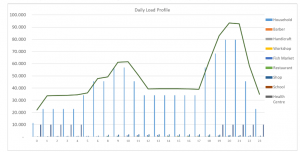 Next stage for the Antrodoco Energy Community !

Building a rural energy community from the ground up

This website uses cookies to improve your experience while you navigate through the website. Out of these cookies, the cookies that are categorized as necessary are stored on your browser as they are essential for the working of basic functionalities of the website. We also use third-party cookies that help us analyze and understand how you use this website. These cookies will be stored in your browser only with your consent. You also have the option to opt-out of these cookies. But opting out of some of these cookies may have an effect on your browsing experience.
Necessary Sempre abilitato
Necessary cookies are absolutely essential for the website to function properly. This category only includes cookies that ensures basic functionalities and security features of the website. These cookies do not store any personal information.
Non-necessary
Any cookies that may not be particularly necessary for the website to function and is used specifically to collect user personal data via analytics, ads, other embedded contents are termed as non-necessary cookies. It is mandatory to procure user consent prior to running these cookies on your website.
ACCETTA E SALVA